If you or your household receive an eviction notice for nonpayment of rent, call 2-1-1 immediately to learn about rapid-payment rent assistance that may help you avoid eviction.
Update December 1: Masks are required in indoor settings in Oregon whether vaccinated or not. 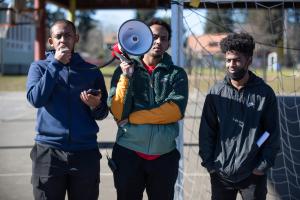 On an unseasonably warm and sunny Saturday morning, dozens of people showed up on the grounds of Rigler Elementary School in Northeast Portland’s Cully neighborhood for the “In My Shoes” walking tour.
The Feb. 12 tour was hosted by participants of Word is Bond — a nonprofit organization that serves young Black men ages 16 to 21 in a year-round leadership program, as well as offers paid summer internships. “In My Shoes” has gained local and even national attention this Black History Month.
Word is Bond led more than 10 tours throughout the month of February — each designed to highlight the voices, experiences and vision of rising Black men in the community.
“To me it doesn’t feel like a novel idea,’’ said Lakayana Drury, the founder and executive director of Word is Bond. “Many people have asked ‘How did this come up?’ We are storytellers, [but] the fact that it hasn’t been done says a lot about what stories get told in this space.
“This project is about declaring that Black stories exist in Portland and that we are masters of those stories, and we can tell those stories ourselves and empower our rising Black men to own those narratives.”
Iman Abdi and twin brothers Ahemed and Mohamed Bullo led the tour this particular Saturday.
Together, the three young men took the group of more than 40 community members — including elected leaders from Multnomah County and the City of Portland, Portland Public Schools officials, and Portland firefighters — on a two-mile trek that they dubbed the “Dream Chaser’s Walk.”
Ahemed and Mohamed Bullo immigrated to the United States from Ethiopia. Abdi was born in a refugee camp in Nairobi, Kenya, and moved to Portland’s Cully neighborhood with his family in 2007. Today, the Bullo twins are college-bound seniors at De La Salle North Catholic High School, while Abdi attends Portland State University.
“This is where I had the aspirations and dreams I’m achieving right now,” said Ahemed Bullo, who opened the tour at Rigler Elementary.
“I remember the first time hearing I’ll be graduating in 2022. That felt like it was such a long time ago, and it’s happening this June. I dreamed here — I wanted to become someone, I wanted to become a leader. And this is it, this is a place that I guess, in a way, cemented it for me.”
“This is where I began growing as a person: my character, my identity,” Mohamed Bullo said. “It meant a lot growing up, playing with kids, having a safe place to hang out, during school and after school, and having adults I looked up to at the time.” 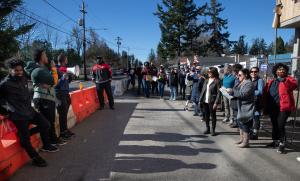 The second of the tour’s eight stops was the construction site of a 50-unit affordable housing project near Northeast Cully Boulevard and Prescott Street.

The second of the tour’s eight stops was the construction site of a 50-unit affordable housing project near Northeast Cully Boulevard and Prescott Street.
Initially, the community believed the site would host a traditional apartment building, pushing out those who can’t afford it, Ahemed Bullo said.
“There’s gentrification going on from St. Johns all the way to Lents Park. But [affordable housing] is what the community and Northeast Portland needs.”
Throughout the tour, the guides shared their personal experiences, recited poems by Black poets such as Maya Angelou and Langston Hughes, and reflected on their community. Ahemed Bullo noted that the narrative of the Cully community is all too often negative.
“Someone may look at the neighborhood and only see the violence,” he said. “But there are people like me, Iman and Mohamed who are doing positive things in the neighborhood. We need to highlight that. That’s why I feel a community center is necessary in this neighborhood because kids will be able to have the opportunity to do something positive.” 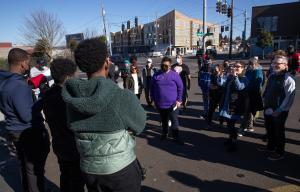 The tour included stops at places with personal significance to the young men including the Portland Market at Northeast Cully Boulevard and Killingsworth Street, which Abdi said offered “a perfect view of the Cully neighborhood.”

The tour included stops at places with personal significance to the young men, from food carts and restaurants to childhood apartment complexes and the local corner store — including the Portland Market at Northeast Cully Boulevard and Killingsworth Street, which Abdi said offered “a perfect view of the Cully neighborhood.”
Across the street he pointed out the Hacienda CDC offices, and another construction site for affordable housing and a covered futsal court that he and his friends used to play on.
“I like to call Cully, ‘the beautiful struggle,’” said Abdi. “There’s a lot of people out there that are struggling with many things. But it’s also beautiful. You could always find someone to help you out. I could go up to any of these houses and knock if I needed something.”
“We’re one big happy family out here, he said. “We were always there for each other and helping each other out when we could.”
The tour highlighted the beauty of the Cully neighborhood, but also accentuated the needs for housing and better streets and sidewalks.
“I always dreamed of having a sidewalk so I wouldn’t get my shoes dirty,” Ahemed Bullo said at a stop between Northeast Alberta and Killingsworth Streets, down the street from Kʰunamokwst Park. 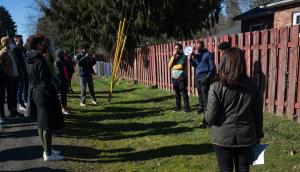 “I always dreamed of having a sidewalk so I wouldn’t get my shoes dirty,” Ahemed Bullo said at a stop between Northeast Alberta and Killingsworth Streets, down the street from Kʰunamokwst Park.

Improvements the community needed years ago unfolded only more recently, once the neighborhood’s demographics began to changed, he said. Using a nearby walking path as an example, he asked, “Where was this four or five years ago, when I could have used it and when other kids could have used it?”
The young men pressed for more investments in a community center, a health clinic, and more libraries and sidewalks.
“I got to the point where I was like, ‘This is my future,’” shared Abdi. “And I’ve got to take full control of my future and speak for what I want to see.”
All three guides have participated in Word is Bond for years. The program launched in summer 2017 as a six-week, paid internship program with the goal of “creating positive relationships between young Black men and law enforcement.”
Today, Word is Bond has broadened to develop young Black men by helping them build connections with those who provide community safety; offering leadership, professional development, career exploration and public speaking opportunities; and providing education about Black history and storytelling.
The program is sponsored by multiple partners, including Multnomah County, which has worked with and supported Word is Bond since its start, providing the funding to pay participants through the County’s partnership with WorkSystems Inc. Other partners include the City of Portland, other nonprofits and private partners.
“I think we’re showing diversity on what Word is Bond is,” said Drury. “A lot of people know us as the organization that works to bridge the gap between young Black men and law enforcement. And we do that, but we also empower Black men to be leaders in all aspects of their lives.”
The Feb. 12 tour included Multnomah County Commissioner Susheela Jayapal, whose district includes the Cully neighborhood, and Commissioner Jessica Vega Pederson, whose nearby district includes much of Southeast Portland.
Multnomah County Chair Deborah Kafoury and Commissioner Lori Stegmann, whose district begins in East Portland and extends through East Multnomah County, both joined a tour of Southeast Portland’s Lents neighborhood the previous Saturday.
Commissioner Sharon Meieran is scheduled to attend upcoming tours in Downtown Portland, which her district includes, and North Portland.
Many other elected leaders, including the district attorney and representatives from the sheriff, have attended or will attend the tours.
“The outpouring of support is really great to see,” said Drury. “I’m glad to see elected leaders showing up, and I’m glad that our youth get the opportunity to share their stories to them and make demands, so I think this is just the first step.”
For Abdi and the Bullo brothers, the chance to lead so many of their fellow community members through the Dream Chaser’s Walk was an opportunity to use their own stories to shape the narrative of the neighborhood where they were raised.
“I hope those on the tour really heard us. I understand they can’t do everything but at least bring up these issues and what we want, our vision,” said Ahemed Bullo.
“I went after my dreams. I had to advocate for myself, and I want kids to learn how to advocate for themselves.”
Find February 12 tour photos here.
Find February 5 tour photos here. 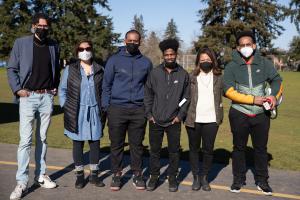 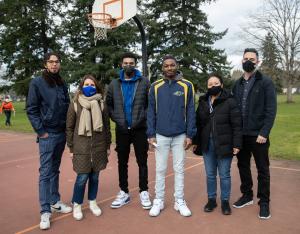