Jen Godwin’s oldest son struggled even with life’s basic tasks. He couldn’t pay attention long enough to brush his teeth. He couldn’t control his emotions either. By age 5, he was taking medications. During grade school he would fly into fits during class.
Godwin would field rapid-fire crisis calls from teachers demanding she come and calm her son down. She would have to hold him tight, sometimes for nearly an hour, before he would relax. By age 9 he was running away from home. 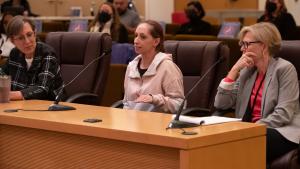